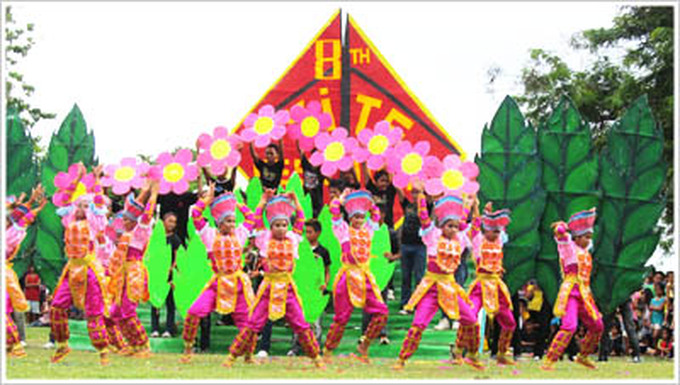 In what was seen to be the most attended edition, Casay’s “8th Kite Festival 2012” held last Sunday, April 15, 2012, at Casay Airstip was successful despite abrupt weather changes.

It was indeed an honor for Barangay Casay to organize such event that has slowly gained more popularity in southeastern part of Cebu.  The Kitefest Organizing Committee was headed by its founder and chairman, Mr. Teonilo B. Sardina, and president, Mrs. Epifania Caruz.  It has received steady support from the Municipal Government of Dalaguete and Barangay Council of Casay.

Jayhan Enopia of Sitio Dakung Balas bested four other hopefuls to be crowned queen in the first ever “Search for Kite Festival Queen 2012”.  Casay Proper’s Jamille Martos was adjudged as the first runner-up, while Sharlaine Paz of Sitio Angas was the second runner-up.  The search was also joined by Relia Mae Canalas of Sitio Cacarpo and Sitio Balatic’s representative, Mary Cris Neri.

Jayhan Enopia also won the Best in Opening Production and her contingent winning the Best in Group Presentation special award.  Sharlaine Paz was proclaimed as the best solo performer and has the best festival gown among the unique and creative gowns made of recyclable materials.

Prior to the festival queen search was the usual “Kite Flying Contest” joined in by a total of 28 participants coming from Cebu City (3), Talisay City (3), Danao City (1), Argao (5), Minglanilla (1), and from Dalaguete (15).

Giving entertainment prior to the Kite Flying Contest and queen search was a live band performance of J.R.I Band and culminating the festival was a coronation of the Kitefest Buddies 2012 followed with a disco, Sunday night.